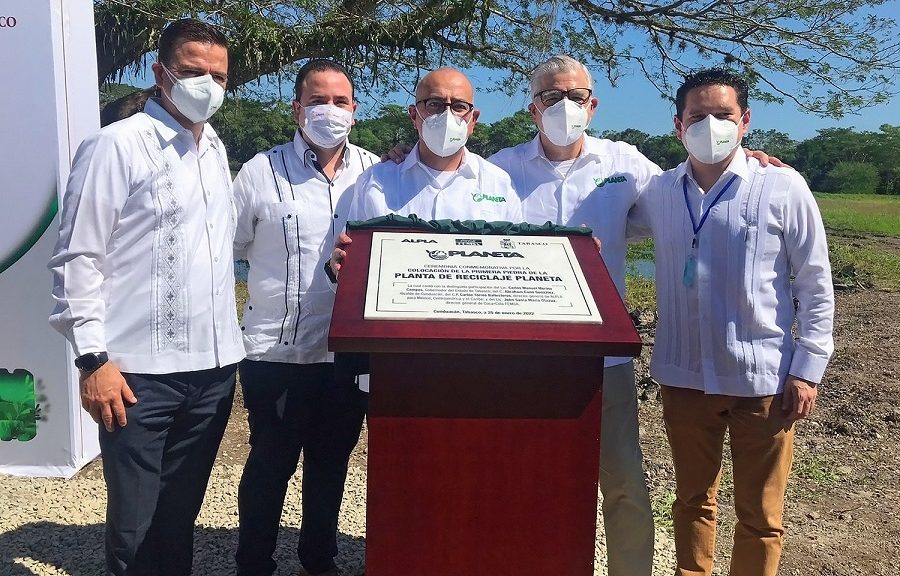 With the aim of boosting the circular economy in the states of south-east Mexico, a cornerstone ceremony was held to mark the start of construction of the new PLANETA recycling plant in the municipality of Cunduacán in the State of Tabasco. The project is the result of a joint venture between ALPLA, a global leader in the development and production of sustainable plastic packaging solutions and bottle-to-bottle recycling, and Coca-Cola FEMSA, the largest bottler of Coca-Cola products in the world.
With an investment of more than 60 million dollars, the recycling plant Planta Nueva Ecología de Tabasco – better known as PLANETA – will be equipped with the most modern technology available worldwide. It will have the capacity to process 50,000 tonnes of post-consumer PET bottles per year, which will result in 35,000 tonnes of recycled PET material ready for reuse.
The cornerstone ceremony was led by Guillermo Arturo del Rivero León, secretary of the government of Tabasco, and was attended by renowned figures such as Carlos Torres Ballesteros, ALPLA managing director for Mexico, Central America and the Caribbean; John Santa Maria, chief executive officer of Coca-Cola FEMSA; Abraham Cano, mayor of Cunduacán; and José Friedrich García Mallitz, secretary for the economic development and competitiveness of Tabasco.

Development node for south-east Mexico
The construction and operation of the PLANETA recycling plant is expected to generate more than 20,000 direct and indirect jobs and will thus make a key contribution to the objectives of the Mexican government headed by President Andrés Manuel López Obrador to promote development and employment in south-east Mexico.
Its strategic location in the region with the greatest potential for solid waste recycling will also make it an important development node that will integrate 18 collection centres throughout south and south-east Mexico. In addition to offering an environmental service, it will boost the region’s economy.

Reduce, reuse, recycle
ALPLA and Coca-Cola FEMSA are embracing their position as leading companies to promote and implement effective measures to reduce pollution, reuse plastic waste and reinforce the collection and recycling chain.
ALPLA CEO Philipp Lehner says, ‘The big challenge today is the handling of the materials after the consumption phase. We are currently investing worldwide in systems to give plastic packaging a value – because then it is collected and recycled. With strong partners like Coca-Cola FEMSA at our side, we will be able to set up the necessary infrastructure and close the bottle cycle in as many regions as possible.’
John Santa Maria, CEO of Coca-Cola FEMSA, explains, ‘As an environmentally responsible Mexican company dedicated to creating economic, social and environmental value in the communities in which it operates, Coca-Cola FEMSA is permanently committed to caring for the planet. This is why we are implementing a series of measures to promote recycling with the goal of recovering 100% of post-consumer packaging.’

Global recycling initiatives
In collaboration with all of the companies that make up the Coca-Cola Mexican Industry (IMCC), Coca-Cola FEMSA is part of the global World Without Waste initiative launched by the Coca-Cola Company, which aims to make all packaging 100% recyclable by 2025, integrate 50% recycled PET resin into bottles and collect 100% of the packaging by 2030.
ALPLA managing director for Mexico, Central America and the Caribbean, Carlos Torres Ballesteros, stated, ‘This new recycling plant for food-grade PET will be ALPLA’s third recycling plant in Mexico, which makes us a spearhead at a national level and a recycling benchmark for the rest of the world. As part of our commitment to sustainability, ALPLA will invest more than 50 million euros every year between 2021 and 2025 to expand its global recycling capacity.’
In 2018, ALPLA and Coca-Cola FEMSA joined the New Plastics Economy Global Commitment launched by the Ellen MacArthur Foundation in collaboration with the United National Environment Programme. Its goals are to make 100% of its products reusable, recyclable or compostable by 2025 and to have 25% post-consumer recycled material in total material consumption by that year.
On this occasion, Guillermo Arturo del Rivero León, secretary of the government of Tabasco, highlighted that ‘PLANETA represents Coca-Cola FEMSA and ALPLA’s commitment to sustainability but, at the same time, it is one more step towards a circular economy, which is essential for achieving the Government of Tabasco’s international commitment in the 2030 Agenda under Carlos Merino’s leadership to build stronger and greener economies.’

Post-consumer PET pioneers
Since 2005, ALPLA Mexico, Coca-Cola Mexico and Coca-Cola FEMSA have united forces to run Industria Mexicana de Reciclaje (IMER), the first food-grade PET recycling plant in Latin America.
Located in the State of Mexico, this facility has a production capacity of 15,000 tonnes of flakes from post-consumer PET per year. Since its foundation, it has processed more than 140,000 tonnes of this material, which has been returned to the production cycle of new bottles. This has saved the same volume of virgin resin, which in turn has reduced the carbon footprint.